My sister grabbed the tickets for the touring Pokémon Symphonic Evolutions concert on a Black Friday deal for the princely sum of £22 per head, which came with the free gift of smug satisfaction as we dodged the full ticket price. In return for our slightly tarnished lucre, we scored two prime seats on the back-row of the Hammersmith Apollo. We figured the sound would carry.

Fast-forward to mid-December, and we found ourselves in a ragtag crowd of Pokémon fans pouring our of the Underground into the venue. After dragging my lazy carcass up a bunch of stairs, we discovered that the back row was actually quite a long way from the stage; in fact, I’d go so far as to say our seats were actually nearer the Hammersmith Flyover. No matter, though! The event wasn’t sold out and so we were promptly offered a free upgrade to seats in the stalls, which was jolly nice of the organisers.

Thus we embarked on two hours of vivid nostalgia, the Royal Philharmonic Orchestra chronologically working their way through each generation of the games from Red to X and Y. It was initially a little odd to hear those beloved chiptunes arranged for an orchestra but I soon got into it. When they played the battle music I was instantly transported back to my childhood—whiling away long car trips on my Game Boy, Dad cracking and threatening to defenestrate the device onto the motorway after four hours of tinny, looping 8-bit music. Good times.

Accompanying each piece was gameplay from the relevant title, which was seriously impressive. Every one was interesting and timed to fit the music perfectly. A trill of violins as we spiral into battle! A crash of cymbals as Pikachu uses Thundershock, lightning flashing across the background! These also helped me untangle the various games mentally, the plots of which have blurred together a bit with encroaching senility. From the simple days of thwarting Team Rocket in Pokémon Red to the somewhat alarming plot line involving weapons of mass destruction in Pokémon X and Y, the visualisations served to both remind us of what we once played and introduce us to things we might have missed.

The event rounded off with the closing song from Pokémon X and Y (complete with the secret lyrics) and, of course, the extended version of the main anime theme. “Sing along!” the organisers said, as if there was any question that we might do otherwise.

It’s sometimes easy to forget that Pokémon were introduced to the UK nearly twenty years ago and the subsequent games have meant that they’ve never gone away. As a result, Pokémon is beloved by players of a really broad age range, from toddlers to those of us approaching our second mid-life crisis. This was reflected in the audience; couples who looked like they’d had to hire babysitters occupied the row in front, a teenager clutching a Gengar plush behind. It was brilliant to see a huge auditorium of kids and adults alike enraptured by video games, by video game soundtracks.

Cue the main theme and the whole room burst into song, a horde of Pokémon trainers united in their vow to be the very best. 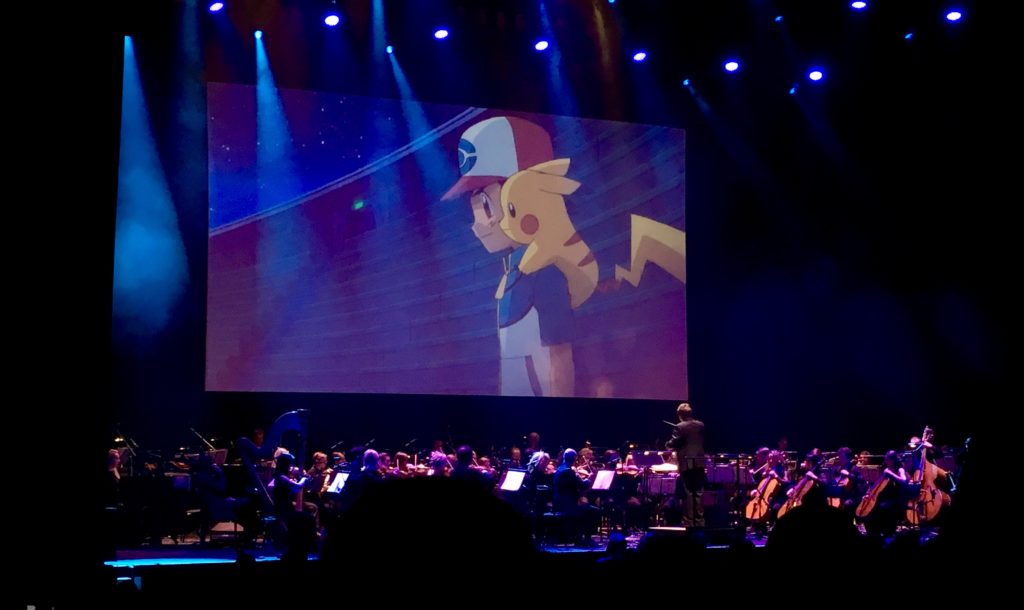