What follows is a very rough write-up of my extensive yet fragmentary notes from the event. It’s more paraphrased bullet points than exact quotes, and probably not comprehensive, but I’ve tried to note who was speaking throughout.

The event was an interesting contrast to the Exit, Pursued by a Zombie writing event I attend the other week. There were a couple of topics I expected that didn’t appear, such as walking simulators and branching narratives.

The Panel, left to right:

AW: What is story?
ES: Just before we start, I recommend everyone read The Door Problem by Liz England if you haven’t already.
Sometime story is a player’s favourite thing about a game, sometimes it’s unimportant.
TJ: Challenges and changes over time are the human condition. Story tidies that up.
RP: Thinking of story as just ‘the word bits’ is problematic. There’s story in everything: arts, music, questions, etc. People always looking for stories, even where there isn’t one.
JS: Story is dialogue, overheard dialogue, lore, item info, signage, etc.
ES: Story is making blobs of light mean something. In the 1980s there was really evocative box art, but only four colours onscreen. It’s pretending the same lights mean different things. A racing game! Mining in space! There’s something about significance, emotions, and catharsis.

AW: Does story mean something else in different media?
JS: Story is story, narrative, whatever the medium.
PR: Story is a journey. The player is on a journey, even though they’re in the shoes of a character1. This is unusual in media, and something we’ve barely scratched the surface of. 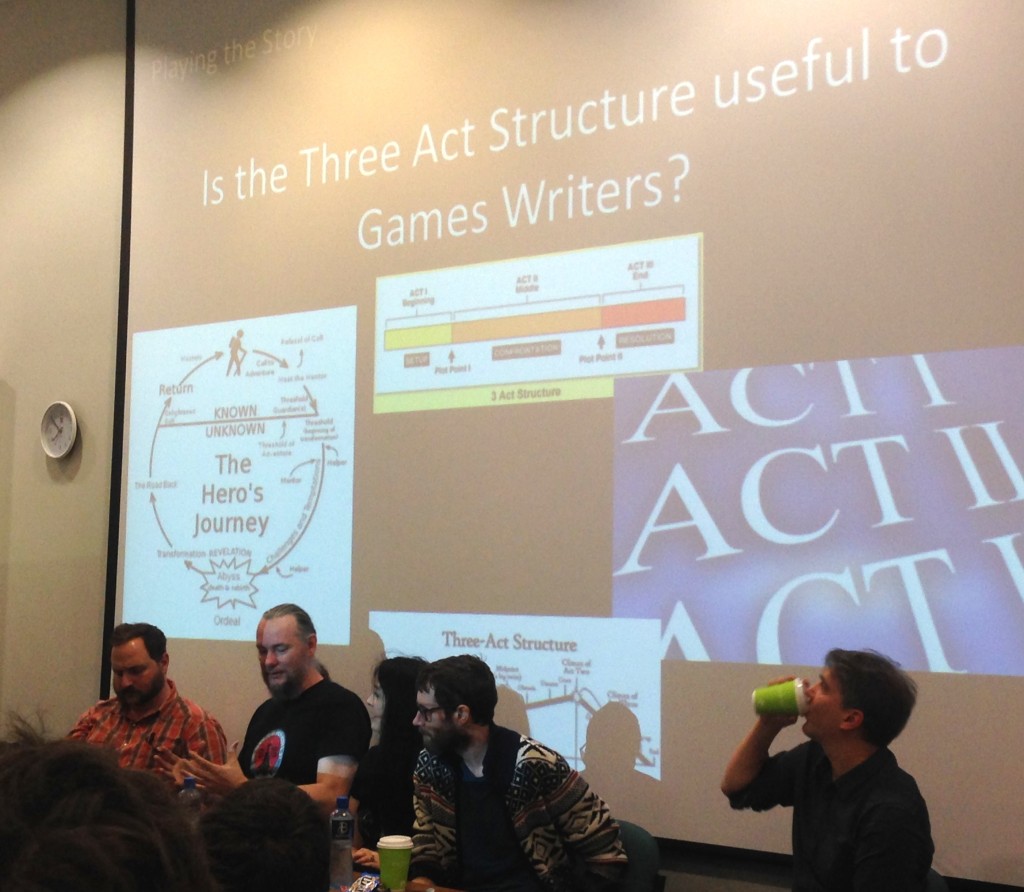 AW: Do we need a different structure?
ES: Screenwriting is helpful if only for the questions it asks. What does the hero need? Why do they need it right now? These are essential questions at all times. The solution to the next problem can’t be the same as the last one. Things get worse as you progress; this is even true of games like Flower.
JS: Films have a Director in charge of tone, keeping it consistent.
RP: The three-act structure can be used as a loose tool. Making things worse—part two of the structure—is often most of the game, as in Tomb Raider. The three-act structure gathers scenes, but there are mini-acts within each of the three acts.
AW: Telltale Games produce games which are largely narrative but with sporadic button-mashing.
TJ: There’ll always be one player playing the game backwards.
JS: There is no ‘one size fits all’. We don’t even have a language for games writing.
ES: I’m asked ‘what program do you use?’. I present the work as scripts but write in Excel/Notepad. Once I put a lot of ellipses in and discovered the in-game font had no ellipses, so that broke the game.
ES: BioWare has a beautiful automated localisation tool; dialogue turns red as its recorded and you can’t save it until the whole tree is done.
RP: Final Draft is nice, but people handle screenplays made in Word/Excel better. Games companies tend to have bespoke tools.
ES: This is often a technical tool and not writer-friendly.
JS: Your tools might depend on what you’re used to. What’s your background? Theatre? Journalism? Novels? There are few pureblood games writers, though this’ll change.
ES: It’s useful to read screenplays, but you rarely see games scripts from other writers.
It’s lovely to see film scripts and realise how short they are per scene.
RP: There are often separate scripts for cinematic bits, dialogue, overheard dialogue, etc. We’re making it up as we go.
ES: No film is made without a script, but many games are made without one.
The main audience for my writing is my boss and maybe two other guys.
AW: There’s a joke; a novelist works on a book for a year, it’s 600K words long; another writer works on a screenplay for a year, it’s only 10k long, because they spent all their time cutting it right down. A writer works on a game; they’re given three weeks and there’s a lorry load of paper parked outside.

AW: Any book recs?
Gamerversion essays [Sorry, misheard this]
RP: Writer’s Journey and The Kick-Ass Writer by Chuck Wendig, plus his blog.
ES: Film Crit Hulk and Robert Mckee [some comment about the New Yorker?],Screenwriting 101 by Film Crit Hulk.
AW: Distillation is a useful still. You can distill alcohol from potatoes—do it well and you get good vodka, badly and you go blind.
TJ: The Writers’ and Artists’ Yearbook.
AW: The IGDA books.
JS: The Secrets of Action Screenwriting by William Martell.
ES: Writing Movies for Fun and Profit by by Thomas Lennon & Robert Ben Garant.

AW: Gameplay or story first?
TJ: If you’d asked me a few years ago I’d have said gameplay—’Plot is gameplay’s bitch’—and my job has been to make life easier for developers with half a world but no plot. It’s easier to rewrite a story than change major mechanics. But there’s not a dichotomy between gameplay and story—both are fundamental. There’s story in all systems, so come at it together.
RP: Story has always come last, thus the digital literacy of games is lagging. Writers are often hired late, unless it’s somewhere like BioWare. We’re like ‘literary paramedics’, patching up bleeding games. Writers need to be helping develop mechanics and the plot from the go.
AW: *Long metaphor involving Bradley personnel carrier and story becoming a jack of all trades.* 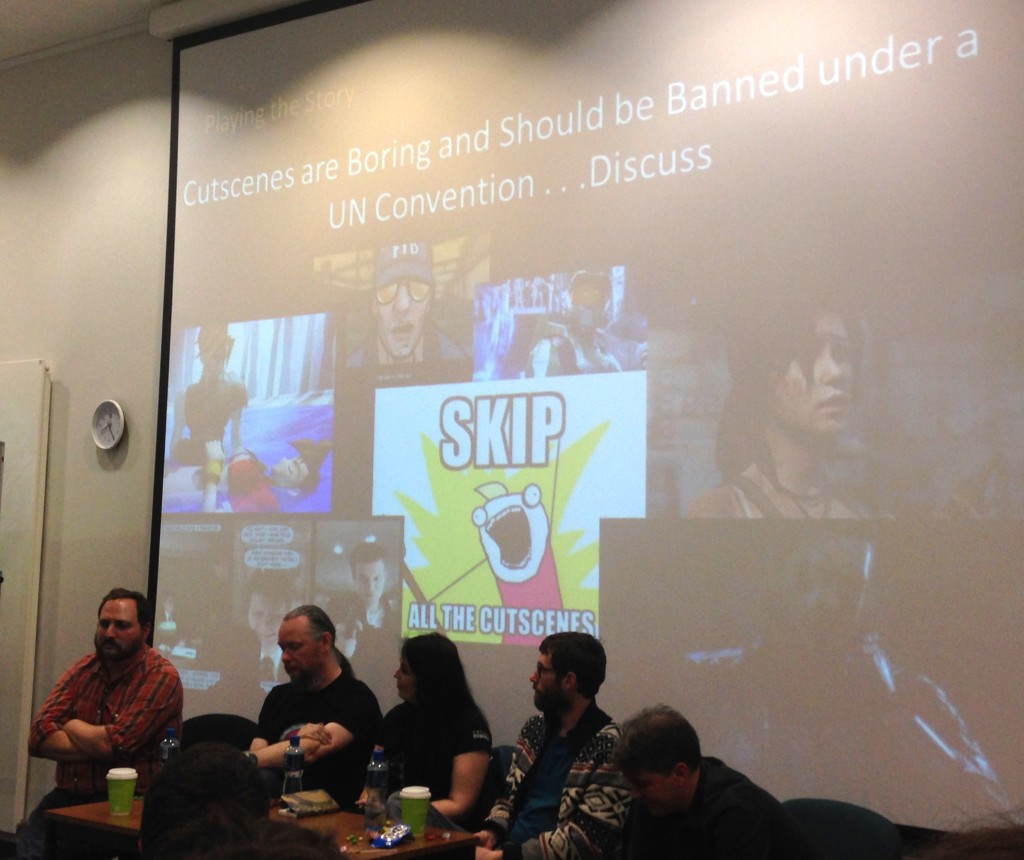 AW: Should we ban cutscenes?
ES: Cutscenes are arguing for their own removal! There are cutscenes in films, i.e. the opening text of Star Wars. The Coen Brothers have basically nothing on the page—it’s all tone.
Games are interactive. We have to trust gamers not to skip the cutscene, the scnene should improve the later game. Custscenes are like inserting a scene from a movie, another medium. If done well, can be informative and wonderful and emotional. If not supported by gameplay, etc., people will find it dull.
What’s the verb in the scene? I once thought ‘surely not everything has to be about conflict?’ But relationships have to be different at the beginning and end of a scene, otherwise it’s just exposition/pointless talking. I was told we British are particularly at risk of this as we love language. “Kill’ or ‘shoot’ used to be the only verbs in games.
Consider what should be in a cutscene vs. what should just be overheard.
AW: What about the reality of games? You’re not actually going to lose a leg in a game unless the VR has gone wrong.
RP: Brevity is key. Keep cutscenes short. Focus on pacing. Cutscenes are a tool in a big toolbox. I liked Diabolo’s cutscenes.
TJ: There’s a time and a place for cutscenes—the 1990s.
ES: It can be a lurch to go from controlling character and pace to just watching a scene. Cutscenes are often viewed as a tax on gameplay, but they should be a treat.
AW: Telltale Games do good cutscenes because they’re very like gameplay.
ES: Telltale’s Games wouldn’t be improved by better graphics; find what’s clunkiest in your games and make it a key element. Stylisation is great.
AW: Companion cube vs. ‘Press A to kill Aeris’—get the emotion out of what you have.

AW: Other techniques to tell stories?
RP: The cutscene of Batman on the gurney in Arkham Asylum, where the player can only move a little and things happen round them. Environmental storytelling; Bioshock with its ads, corpses, audio records. Spider: The Secret of Bryce Manor.
AW: If great, why are these methods not use? It’s a hassle.
ES: Recommended reading from Cara Ellison on bloody graffiti in games. 2D textures are cheap. High poly facial animation is insanely expensive. In TV/film, close-ups of characters listening to stuff is easy and cheap—in games it’s the most expensive. Games and TV/film have opposite scales of expense; explosions are easy/cheap in games but hard/expensive in live action. There’s a fab moment in Uncharted where a character just shrugs, done in motion capture, which was great but surely very expensive.
AW: The Art Director for Half Life 2 once talked about the world it’s set in. They devised a history for every building in the game. This is good, but I’ve had Art Directors say ‘Fuck the story!’ before.

Audience: What are the alternatives to diaries/journals?
TJ: Why do we want to put journals in? Look at your world and find a more offbeat method. Psychonauts is good—like journals, but in people’s heads.
RP: Psychonauts has great level design, mechanics, etc.—they all feed into the story.
AW: On-demand dialogue is good. The journals in Bioshock Infinite are all over the shop—why are they lying about? Plus, their audio conflicts with other environmental audio. The diaries in Fallout 3 are good, telling mini-stories—the post-apocalyptic farm diaries found in a burnt out building particularly so, ending with a mention of lights on the horizon.
ES: We’ll never get rid of story logs as they’re the easiest way to dump info on the player. ‘The fleets meet‘ is famous for a simple but expensive scene direction. For computer games something along the lines of ‘the armies of dragons landed in the field of mirrors’ would be similar. We once trolled the programmers by writing things like ‘river of fire’ and ‘hall of mirrors’ on a whiteboard near them.
AW: Overhead dialogue and diaries must fit the world.
JS: Narrative dark matter—the stuff which has an impact but doesn’t necessarily feature.
AW: Subtext shouldn’t be text.
ES: In Red Dead Redemption people talk about how many gunmen there are.
Designers/Writers are worried you’ll miss stuff, so you’ll find characters saying things like ‘Oh, you’re going to the castle to rescue the princess?’ or overhear ‘Gosh, I hope someone rescues the poor princess from the castle!’ a lot.

Audience: Could procedurally-generated writing by computers develop?
TJ: Someone would have to set the parameters.
JS: It’d be like @magicalrealismbot, but dialogue?
AW: Is a painting by an elephant art? That said, computers can already produce better writing than exists in some games.
We’re not doing writing right with people yet.
RP: I recommend a talk from GDC on ‘narrative Lego’.
AW: Story vs. experience—they’re not the same thing.

Audience: Tips for indie developers?
ES: Hire a writer!
AW: Does your game need a story?
If you can pay cleaners and office rent, you can pay a writer.

Audience: How do you get developers who aren’t fans of story onboard?
ES: Physical intimidation.
TJ: Work with teams that are already onboard.
AW: Depends on the people.

ES: I recommend The Writer Will Do Something to see what games writing can be like.

1 For those interested, the speakers at Exit, Pursued by a Zombie, explored this idea more.